As a child (or young adult), I never cooked. I didn’t know how to. I could rustle up a decent cup of instant coffee but that was it. Mummy tried her best to get me to help around the kitchen, perhaps learn to cook a few basic things. But I wasn’t remotely interested.

Mummy, smart and wise woman that she is, gave up on the obvious to-be-wasted effort. Her thought? You will learn to cook when you need to.

How right she was.

I arrived in the United States, a young and hopeful bride, hopelessly earnest and wondering/wandering. And I had to get cooking. So I learned quick on the job. Some blogger friends may recall old posts where I describe cooking moong dal, or what I thought was moong dal but ended up being masoor instead. I used to call P at work, asking him to “troubleshoot” difficult cooking situations. Ahhh, those were the days.

That was the time I began maintaining a notebook of recipes I got from my mother. And that’s how I got hold of the Parippu Pradaman recipe.

This is a traditional Kerala dessert, made from moong dal, jaggery and coconut milk. Yes, it is vegan. And it is ready in minutes, if you use canned coconut milk. You can fancify this dish with raisins and toasted cashew pieces, if you like.

I prefer the simple version, so here goes.

Cook moong dal in a pressure cooker, or on the stovetop in a pan.

Using the back of a spoon (or a potato masher), mash the cooked dal to remove lumps and gain a uniform consistency.

Place jaggery in a pan. Add boiling water, mix evenly. Cook on medium-low heat until the jaggery melts into a syrup consistency.

Add more (or less) coconut milk to get the desired consistency. Remember, coconut milk adds sweetness, so adjust the amount of jaggery accordingly.

Some desserts are destined for greatness. Take this one, for instance.

“The rich notes of coconut oil combine with the mild sharpness of carob to create a creamy and delicious raw fudge that is punctuated by little bites of walnut, the faintest whiff of vanilla and a smidgen of sea salt.”

I suppose that is how a seasoned food blogger would describe this dessert. Am I a seasoned food blogger? Not really. So I am simply going to say that this is a delightful little piece of sweet heaven. The taste is so memorable that I was reminded of it throughout my morning yoga and meditation. It lingered on in my mind, my taste buds, my nose… 🙂

Did I also mention that it is gluten-free, raw and vegan?

This excellent recipe came to be via AllGoneVegan. Oops, I made a slight change. I used carob powder in place of raw cacao and I am glad to say that the fudge does not suffer from the substitution, not even a little. I love it. In fact, it makes me doubly happy that I can avoid that hefty dose of caffeine. The fudge set in an hour or so. The coconut oil in the recipe is what makes it firm, I think.

After a couple of hours, I took the block of fudge out of the freezer, cut it into bite-sized pieces and put them in a plastic container. Back it went to the freezer and that’s where I stored it.

The coconut oil grants the fudge firmness but when you bite into a piece, it dissolves into a rich creaminess… Full marks for texture!

I think I’ll make this again and again… All my friends loved it unreservedly. I might add in a few raisins next time.

The flavor of coconut oil isn’t intense but it is unmistakeable.

Truth be told, I am not a brownie fan.

I find most brownies too chocolate-y and/or too flour-y. Excess of chocolate gives me a headache. Well, here is one brownie recipe that even I can get behind. It is a vegan recipe (if you use vegan chocolate), wheat-free (I used spelt flour), rich in little doses, an afternoon indulgence… and if you really wish, you can fool yourself into thinking it is a healthy dessert because it uses extra-virgin olive oil.

The recipe came to me via The Traveler’s Lunchbox. I made my own little tweaks, messed up a little, scrambled frantically, heroically salvaged the brownies… bravo, me! So, here is my take on Melissa’s recipe.

Preheat the oven to 350 F. Line a 8 inch baking pan with an oiled piece of parchment paper letting it hang on all four sides.

Melt the chocolate. Here’s how I do it. Place the chopped chocolate in a steel/glass mixing bowl. Place the bowl in a larger pot containing warm water. Keep the pot on the stove, turn on the heat. It does not take more than a couple of minutes for the chocolate to melt. Turn off the heat.

Mix the flour and salt in a small mixing bowl.

Beat the “eggs” with sugar, then add peppermint extract and melted chocolate-oil mixture. Add the flour+salt, then the toasted hazelnuts. Stir until everything is combined.

Bake until the top crust appears dry and a toothpick inserted into the center emerges moist. It took me roughly 26-28 minutes.

Rich and decadent, this is a brownie best eaten in little bites. The original recipe calls for dark chocolate (70% cacao) but I used a far milder one. I am sure that a darker variety will also yield a luscious brownie. Melissa’s recipe uses four ounces of chocolate. However, I got a three-ounce bar of chocolate from Whole Foods, so that is the quantity I used. To me, three ounces is plenty of chocolate for this recipe.

Melissa’s recipe uses vanilla extract but I have a bottle of peppermint extract in the pantry that is constantly calling out to me. So that’s the flavor I went with. Besides, I am hugely partial to the chocolate-mint combination.

My misstep of adding the olive oil to the batter at the end may have resulted in the brownies leaching oil after they were baked. So I had to line a container with paper towels to absorb the excess oil from the baked brownies. I wonder if that would have been avoided had I mixed the olive oil with the melted chocolate, as per the original recipe.

I think I baked the brownies a minute or two extra. They turned out good but I think they would have been softer had I taken them out sooner. This batch was a little chewy.

Olive oil adds a clean flavor, a lightness in texture. It is quite unlike the buttery richness most brownies have. Feels a lot lighter on the stomach too.

I would take an olive oil brownie over a regular one any day.

What does a vegetarian eat at a Brazilian steakhouse?

A lot of stuff, as I discovered this afternoon!
Fogo de Chão is an authentic Brazilian steakhouse that is well known for its various cuts of expertly grilled meat and the continuous tableside service. Servers walk around holding platters of meat. Each diner is given a circular card (right). If the red colored side is facing up, it means that you don’t require anything, at the moment. Turn it the other way and the green side faces up. When you do that, a server walks up to you with his platter and offers you a slice (or more) of the specific cut of meat that he’s carrying. All servers looked (and sounded) Latin American. Well, they could have been Central American too, I guess! They were dressed in dark blue shirts, blue-black roomy pants and boots. All very nice and elegant and formal, I thought.
So what did I eat? Fogo de Chão has a SPECTACULAR salad bar section. There must have been close to 50 items laid out and as much as I wished, I couldn’t load my plate more. I resolved to go back for seconds so that I could sample more items but I was too stuffed. 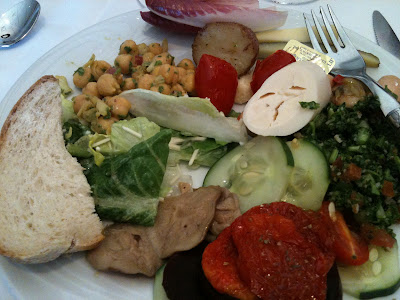 Chickpea salad, butter beans, hearts of palm, sweet red peppers, roast potatoes, cucumbers, button mushrooms, tabouli salad, beets, salad greens, roasted peppers, sun dried tomatoes, cheese, endives… and possibly some other delicious items I am forgetting? Oh yes, I saw some jumbo asparagus and mozzarella balls that I passed fully intending to come back to them later. Alas, that didn’t happen… 🙁
This was my first time eating hearts of palm. Tender and juicy, they were slightly tart (probably due to the brine/marinade?). The sweet-spicy red peppers were gorgeous – I wonder what they are called? 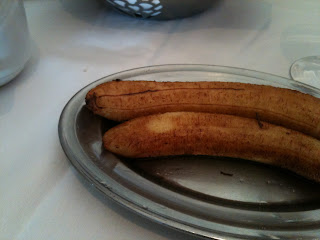 The servers also bring you an unending stream of the sides namely, pão de queijo (delicious little cheese bread pockets – YUM!), crispy polenta wedges, mashed potatoes with garlic and cheese, and caramelized bananas. I missed taking a picture of the polenta and the mashed potatoes. They were excellent too!
I had to steel my heart and not eat any more just so I could sample dessert. One of the items was Fogo de Chão‘s signature Papaya Cream. Then there was the Creme Brulee which I generally avoid because it contains eggs. Now I know what you’re thinking – you are dining at a steakhouse and you want to avoid eggs? Yeah, ironic, I know, but you get my drift, don’t you? I went ahead and ordered the Molten Chocolate Cake that’s essentially a chocolate cake with a fudge center, served with vanilla ice cream. Just as the server was going to turn away, I changed my mind and asked for the Papaya Cream. Good decision, I think.
Wonderful! The perfect combination of creaminess and sweetness and richness… fabulous.
I would go back to Fogo de Chão in a heartbeat as long as no one laughs at me for being the girl who ate a huge plate of salad at an authentic Brazilian steakhouse. Well, I need to taste the Molten Chocolate Cake anyway.

Oh, the reason I landed at Fogo de Chão for lunch one afternoon? My generous boss treated us to a Christmas lunch and he picked this place knowing that even as a vegetarian, I would be able to eat well here. So sweet.
Share via:
« Older posts