In the midst of this sweltering heat, sip some delicious ice-cold relief in the form of Rooh Afza!

Rooh Afza is a sweet syrup made of rose juice. Add milk/water, thrown in some ice-cubes and gulp it down! I have seen another brand (possibly Dabur) that also contained cucumber juice extract among other juices. Need to see where I can get hold of that.

Rita’s Ice has a branch close to our place. After a swim, it was a short walk away to indulge in Mango Italian Ice. Icy cold and delicious! Btw, if you are interested (I am!), here’s a recipe from NPR’s Kitchen Window that combines Rooh Afza and a basic Italian Ice recipe. Read about the Soulful Granita here. Scroll to the bottom of the page.

Here is the Chilled Tomato Gazpacho from Metrofresh that was part of my lunch yesterday. I haven’t tasted a Gazpacho before and all I know is that it’s a soup served cold. It tastes like a liquefied version of tomato salsa, not too tart or sour or sweet. A mild taste of onion and garlic, herby flavor of fresh cilantro, smooth texture and nice mouthfeel.

P mentioned that it should have contained cucumbers as well. But I don’t think this one did.

Summer is on its way out. Temperatures are dropping, light fades fast, leaves are changing color… Not many days remaining to eat popsicles or frozen yogurt. One day last week, it was really hot and I stopped by at Yogli Mogli.

This is a self serve frozen yogurt chain that I discovered this summer. The yogurt contains no gelatin (yeah, I asked that the first time I visited) and comes in flavors such as Georgia Peach, Cookies-n-Cream, Strawberry, etc. Many of the options are low-fat/zero-fat too. This time, I picked the Georgia Peach flavor. 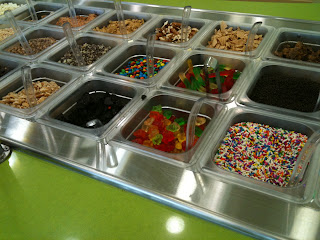 There are two kinds of toppings. One kind (as you can see on the left) includes gummy worms, M&M candies, licorice candies, cookies, etc. Most kids make a beeline to this section. Who could pass up all that sugar? Sigh. Well, I have. I have never stopped at this section. My favorites lie ahead. 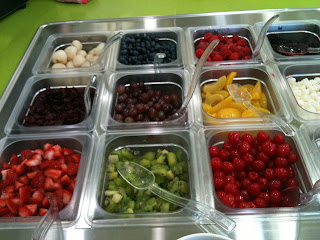 How can you possibly resist plump lychees, tiny blueberries, juicy mangoes and peaches, cranberries and kiwi fruit? Absolute yumminess. I generally load up on fruits, piling them high into my bowl.


That bowl (on the right) cost a little over 4 dollars.

I have got frozen yogurt from Yogli Mogli so many times. And loved it. This last week was good too but the yogurt had a watery texture. I am not sure – did I select non-fat? Not sure. I missed that yummy creaminess that sets off the fruits perfectly. Hopefully, it will be nicer next time although I am not sure if that next time will be anytime soon.

I am a late entrant to the basil pesto fan club but I am a loyal fan now. Think of basil pesto as an Italian take on the ubiquitous mint-cilantro chutney. In fact, I can match ingredient for ingredient between the two recipes! Let’s try that out…

The standard pesto recipe departs from the mint-cilantro chutney one at this point but the important points are covered, don’t you think?

So you start with fresh basil. I picked a bunch from Harry’s Farmers Market. The packet mentioned that it’s grown hydroponically, and if I keep the roots submerged in water, it would last longer. Chop it finely. Put in the mixer jar. 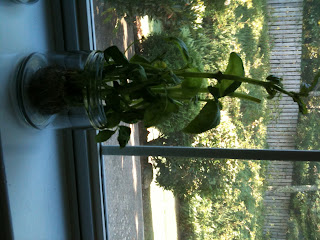 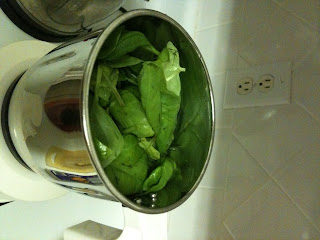 I didn’t have pine nuts at home. So I roasted some walnuts instead using a skillet. You have to be attentive or else you’ll end up with a bowl of burnt walnuts!

Next, chop up some garlic and throw that in there as well. Most times, I don’t have garlic at home. But this time, I did and so I used it. I am sure purists will disagree but I have made pesto before without using garlic and it tasted perfectly wonderful. 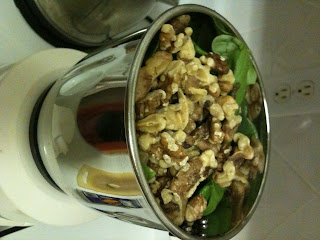 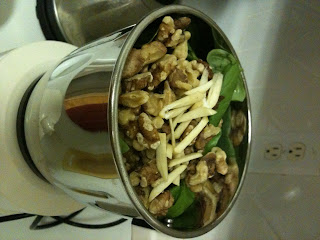 Pesto also contains cheese (mostly Parmesan or Romano, as this recipe mentions). I had paneer at home, and so I used it instead. Pulse it all together. Don’t forget to add salt and pepper. Pour in some good olive oil while it’s getting pulsed. I bought this brand (below, right) from Dekalb Farmers Market. You can also see the smaller bottle of chili oil next to it, a bottle of Braggs right behind, and possibly the can of sesame oil to the right of the picture. Just giving you a mini-tour of the oils and seasoning cabinet… 🙂

You can also add the oil later, after the pesto is made. You end up with a shiny and creamy fresh basil pesto that is pure yumminess.

Slather it over toast, toss it with noodles… Any other ideas? Let me know in the comments! 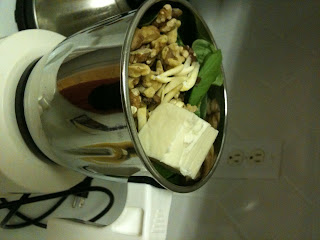 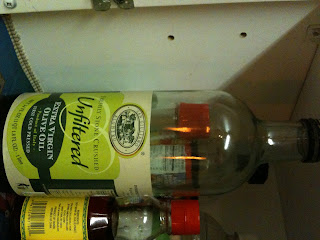 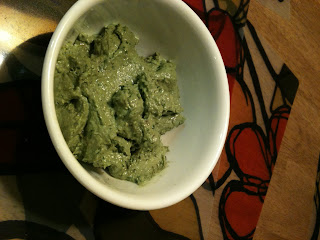